What is the CRTC hiding about Chair Ian Scott?

A few months ago, we blogged about how the CRTC was suppressing information about chair Ian Scott’s reportedly private meetings with large companies such as Bell and Rogers.

How bad is that suppression? In our latest request for information, the regulator has released a heavily redacted calendar entry for Scott’s now well-publicized beer meeting in an Ottawa pub with soon-to-be Bell chief executive Mirko Bibic on Dec. 19, 2019. The meeting was held just days after the company filed an appeal on internet wholesale rates with hundreds of millions of dollars at stake.

The redactions include a partial removal of the subject line, plus full blocking of the location and times. These are startling omissions, given that Scott has admitted to the meeting and much of the redacted information is already public knowledge, suggesting the CRTC is attempting to hide something:

The regulator maintains the omissions are warranted by the Access to Information Act, which allow for redactions of personal information. We don’t agree and are pursuing complaints with the Office of the Information Commissioner. The CRTC’s reasoning is especially questionable given that it has disclosed location and times of other meetings in similar requests we’ve made: 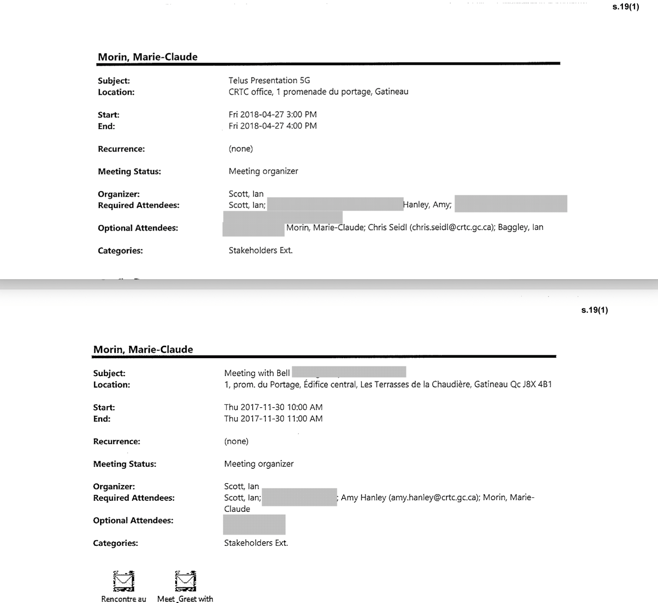 The CRTC chair is very much in the hot seat now. In a recent Toronto Star interview, he admitted he was meeting with Bibic as friends. That admission was soon followed by the Competitive Network Operators of Canada, a coalition of smaller internet providers, filing a request with the CRTC that Scott recuse himself from all future telecom decisions on account of his alleged bias toward big companies.

Scott was then grilled this week by the House of Commons Industry and Technology committee for his actions and decisions, including last year’s reversal of the wholesale rates decision, which has kept consumer prices high and hurt smaller competitors while benefiting Bell and other big players.

MPs said his behaviour has harmed the CRTC’s reputation. “I’ve been asked by many people what purpose the CRTC serves today,” said MP Nate Erskine-Smith. “When it comes to the essential service that is the internet and making it more affordable and accessible for Canadians, I’m not sure I have a good answer.”


Here's @beynate mic drop on the #CRTC and how it is failing Canadians. pic.twitter.com/rlyTi8zQMd