Not only are the CRTC’s recent decisions effectively dismantling telecom competition in Canada, but a shroud of secrecy surrounds chair Ian Scott’s recent meetings with Big Telecom representatives, if our efforts to shed light on his activities are any indication.

Back in the spring, the Toronto Star revealed that Scott, a former Telus lobbyist, met privately for drinks with Bell chief executive Mirko Bibic while Bell had active files in front of the regulator. The report also revealed that Scott was meeting, seemingly alone, with Big Telecom lobbyists on a regular basis – with over 20 such meetings listed in the lobbyist registry.

No wonder the regulator’s key decisions in 2021 have kept internet and mobile prices high for consumers – especially its shocking reversal of its own 2019 decision on wholesale internet rates and its denial of wholesale competition in wireless. Time after time, the CRTC has ruled firmly in favour of Canada’s Big Telecom oligarchy.

So, in June, I filed several access-to-information requests seeking more information about Scott’s meetings.* I requested three pieces of information on each: were they in fact private or were other CRTC staff present, where did they take place, and copies of any agendas, notes or minutes produced.

The CRTC partially responded in September. It did not confirm who attended the meetings or provide any agendas or notes. One eye-opening piece of information that was supplied however, was an email confirming Scott’s private beers with Bell’s CEO. That meeting took place on Dec. 19, 2019, with an eyewitness photographing the pair at Darcy McGee’s pub in Ottawa at 5:25 p.m. The time stamp on the email confirming the meeting, however, is 5:57 p.m.

Confirmation of the meeting appears to have been created after the meeting was already underway, suggesting it was only sent because Scott was spotted with Bibic. This prompts an important question: How many other meetings are happening that aren’t reported because no one was there to see them? 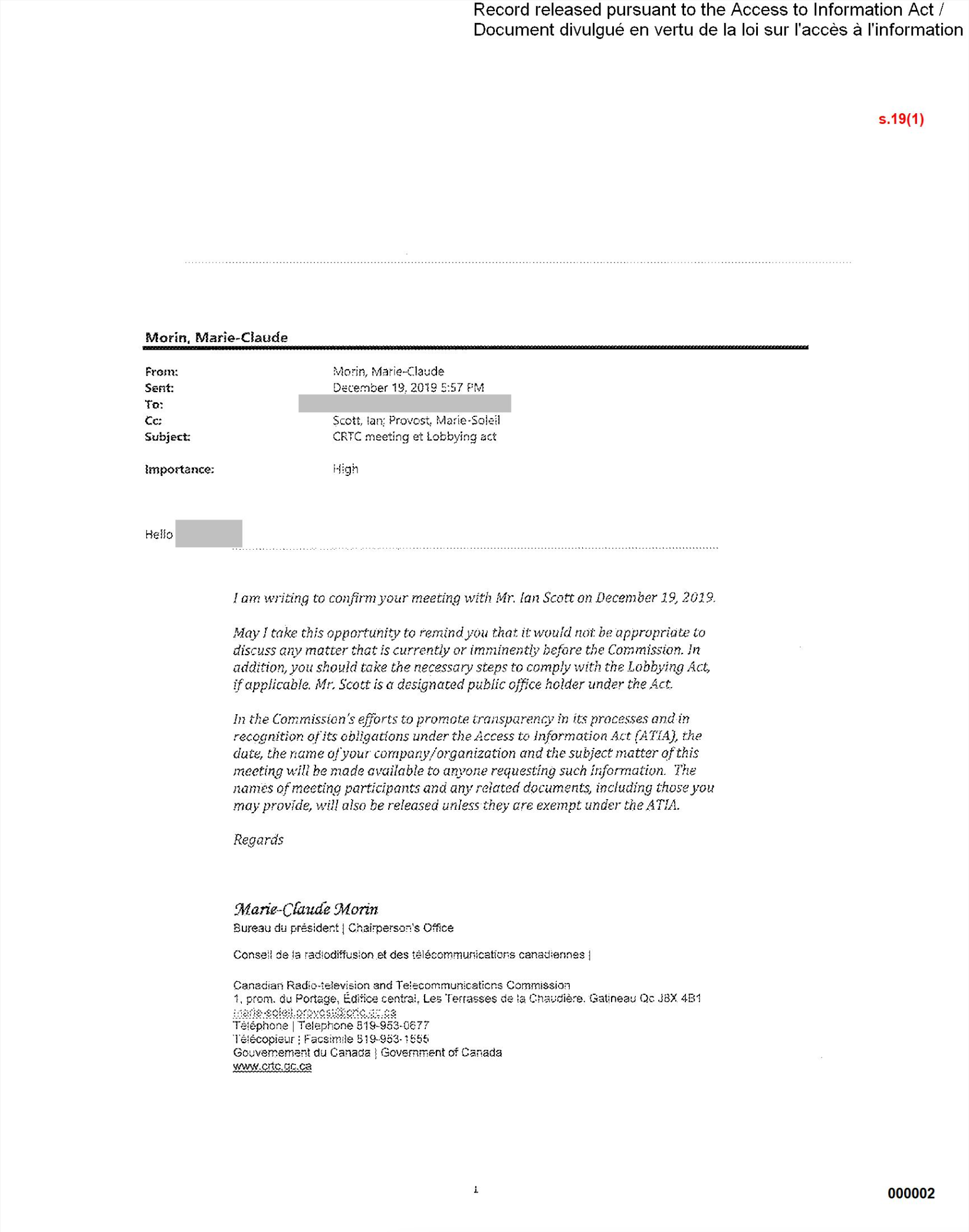 The CRTC’s response also noted it was continuing to consult “third parties” on our requests and that further information would be forthcoming. With the ATIP deadlines now passed and no further information supplied, last week I filed five complaints with the Information Commissioner of Canada. By this point, nearly six months later, the CRTC appears to be withholding information that should be made public.

Back in May, TekSavvy petitioned cabinet to reverse the CRTC’s arbitrary 2021 wholesale internet rates decision – which is keeping retail rates higher than they should be – and to remove Scott from his position for his apparent bias toward Big Telecom. So far, cabinet has not acted on those requests.

The government’s silence on these matters, and the CRTC’s, is problematic and must be addressed. Obfuscation of this sort must not be allowed in a democratic country that supposedly values fairness and transparency.

Bell CEO Mirko Bibic meeting with CRTC chair Ian Scott alone at Darcy McGee's pub in Ottawa on Dec. 19, 2019. An eyewitness says this photo was taken at 5:25 p.m. The CRTC sent an email to Bell confirming this meeting half an hour later.

*For the record, here’s a list of those meetings from the start of Scott’s term as chair to early 2021, from the federal lobbying registry: