This week’s unveiling of the Regulatory Capture Lab, a research project by the Centre for Digital Rights and Friends that seeks to shed light on how big companies influence regulators and politicians, is welcome news.

The project is so far focusing on Big Tech and the likes of Google and Facebook, but it’s good to see the overall problem of regulatory capture in Canada getting some sorely needed attention. From banks and airlines to energy and even groceries, numerous industries have thoroughly inserted themselves into the policy- and law-making process. The end results are often detrimental to regular Canadians in terms of competition and the prices we pay for goods and services.

This is especially true in telecommunications, where former executives of companies such as Bell and Telus are in key government and regulatory positions; where some of those same individuals flout fairness principles by having friendly drinks at the pub; and where anti-consumer decisions become routine and high prices result. It’s enough to lead some observers to refer to Canada as three telcos in a trenchcoat.

Regulatory capture, or at least the appearance of it, is easily quantifiable. We merely have to look at publicly available lobbying reports to see who is getting the ear of policy makers. Subsequent decisions can be matched against these figures to determine how effectively industry is getting what it wants.

Comparing recent telecommunications decisions and lobbying stats, it certainly looks like quantity is translating into benefits for Big Telecom. 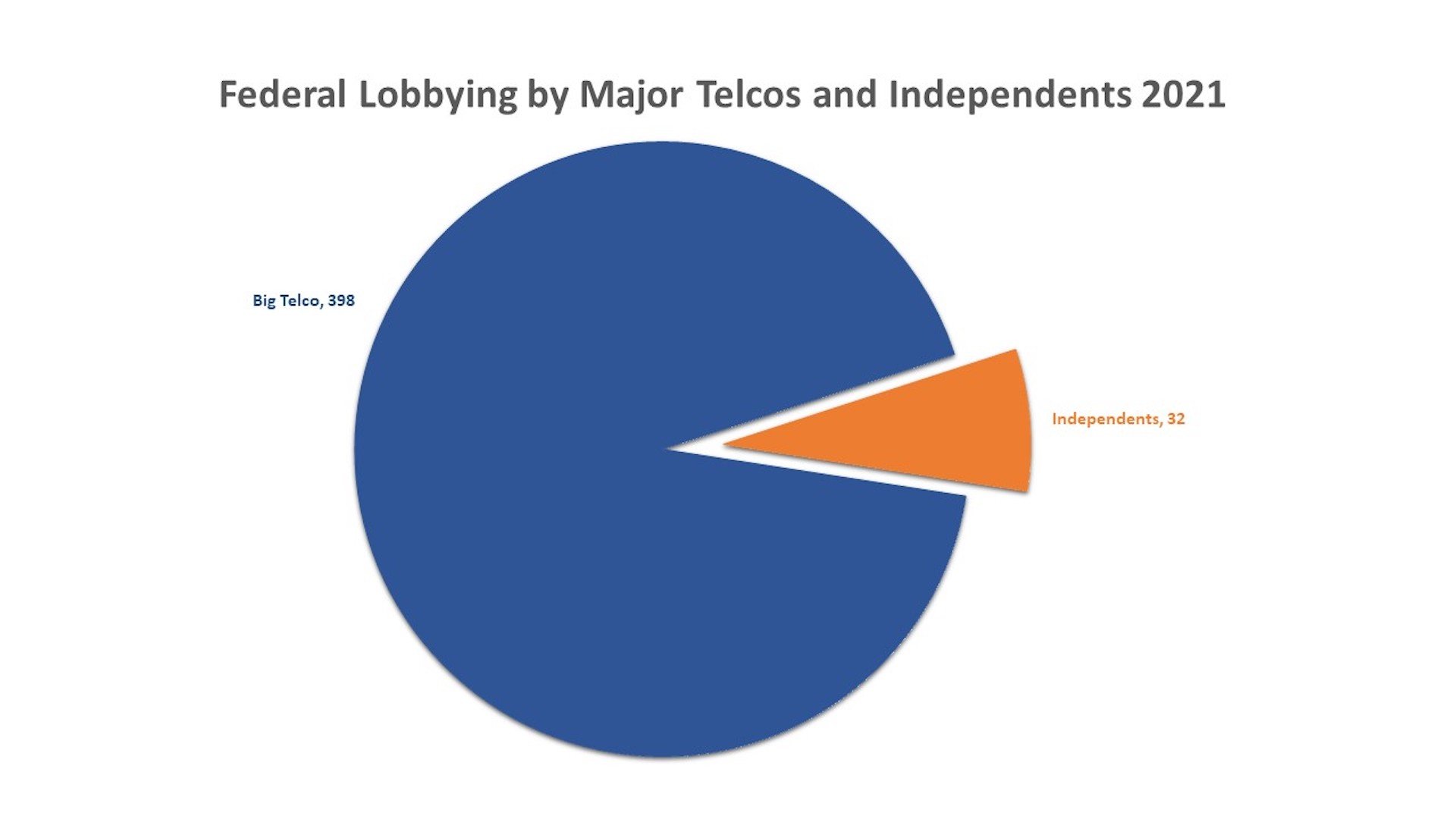 In 2021, Bell, Rogers, Telus, Shaw, Videotron and Cogeco collectively reported at least 398 lobbying communications with public office holders. That means on average they met with a Member of Parliament, their staff, or regulatory officials enough for every single day of the year, and then some.

This is even more notable considering that official lobbying activity was shut down for several months because of the federal election. And it doesn’t include the friendly, private lobbying in pubs that is likely happening, but impossible to quantify:

Like it or not, some lobbying is a part of the political process. Companies and groups need to argue their cases to policy makers, who then make decisions based on the information they have in front of them.

But when the volume of lobbying is so skewed toward one side of an issue or industry, it’s easy for decisions to follow suit.

Not surprisingly, the CRTC last year abruptly cancelled lower internet wholesale rates and killed off the potential of significantly more wireless competition, both of which would have resulted in considerable savings for Canadians – but also lower profits for the big companies.

At this point, those results aren’t just on the CRTC. Consumer groups and smaller providers appealed those decisions to the government – TekSavvy filed its wholesale rates petition nearly eight months ago – and are still waiting for rulings.

Regulatory capture is real in Canada, especially so in telecommunications, and Canadians are paying for it. The Regulatory Capture Lab is a great first step toward shedding more light on this serious problem, but much more attention is needed.