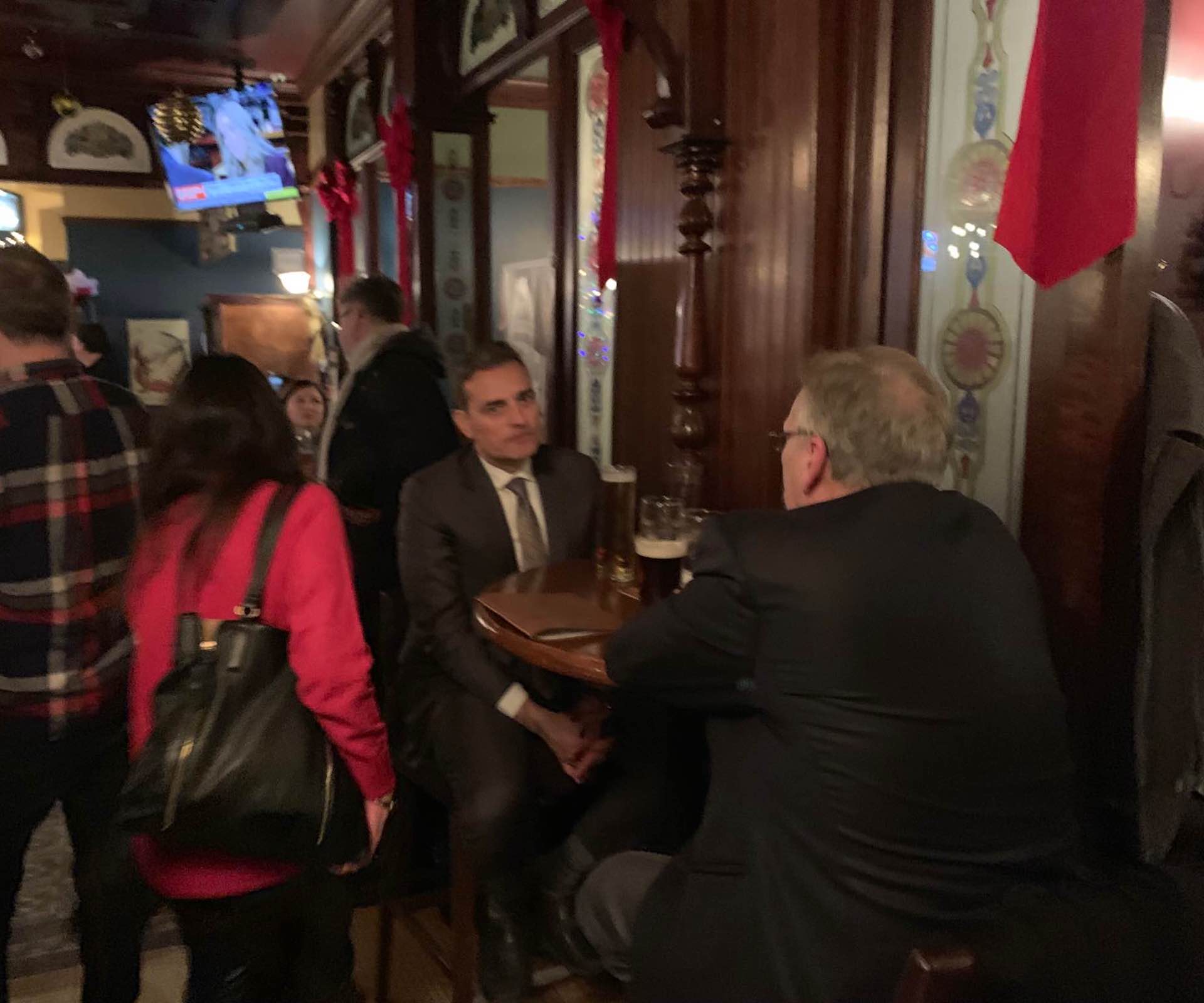 What is wrong with this picture? To the casual observer, the above photo may seem unremarkable – just two men having beers in a bar.

The scandal lies in who those two men are and when the picture was taken.

The man facing the camera is Mirko Bibic, chief executive of Bell Canada. Sitting across the table is Ian Scott, chair of the Canadian Radio-television and Telecommunications Commission. These two men met alone at D’Arcy McGee’s pub in Ottawa on Dec. 19, 2019, just six days after Bell filed a major application with the CRTC seeking the reversal of a decision that would significantly reduce wholesale internet rates.

What did Scott, a former Telus executive and lobbyist, and Bibic discuss? It is impossible for anyone to know.

Here’s what we do know: On May 27, 2021, the CRTC stunned consumer groups and industry observers when it ruled in Big Telecom’s favour and scrapped its wholesale rates decision. That “final” 2019 decision was based on years of process and mountains of evidence. It had already been upheld by the Federal Court of Appeal and the Supreme Court declined to review it. The decision would have lowered internet prices for millions of Canadians.

This photo, taken by an eyewitness, is among the evidence TekSavvy has filed with the federal Cabinet in support of its request that the government remove Scott for apparent bias and restore the CRTC’s evidence-based 2019 decision.

The CRTC’s reversal of that decision lets those companies keep hundreds of millions of dollars in unfair charges and now guarantees even higher prices for millions of Canadians, who already pay some of the steepest internet rates in the world.

Former commissioners describe Scott’s private meeting with Bibic — in the middle of an open appeal with hundreds of millions of dollars at stake — as offside the CRTC’s own internal policies. A former chair noted that he “would include a third party, typically the CRTC’s general counsel, in lobbying meetings with industry.” A former vice-chair pointed out that Scott’s solo meeting at a bar “would fall into the category of high-risk behaviour.”

In fact, Cabinet fired commissioner Raj Shoan in 2017 for his two solo meetings with stakeholders with an interest in open files before the regulator, citing his “inappropriate contact with CRTC stakeholders and his lack of recognition and disregard for the impact of that contact on the reputation and the integrity of the CRTC.”

Shoan’s contact with stakeholders was trivial compared to Scott’s and had no ramifications for consumers. In contrast, Scott held at least 11 reported solo meetings with Big Telecom lobbyists while their application to reverse the 2019 final rate decision was open.

On this point, TekSavvy also provided Cabinet with a 2014 PowerPoint presentation prepared by Christianne Laizner, then a senior general counsel at the CRTC and now its vice-chair of telecom. The PowerPoint stresses serious "concerns about private meetings," including that there is "an opportunity to influence" and it is "difficult to prove what was or was not said" in private.

It also advises commissioners to invite staff to witness any meetings and to check with counsel whether accepting a meeting creates a real or perceived risk of bias. The Federal Court found Shoan’s failure to strictly adhere to these policies as “very troubling” and was a reasonable basis for Cabinet’s decision to terminate him.

To compound his apparent bias, Scott said in a recent interview that he has “a personal preference” for facilities-based competition. In other words, he is not a fan of service-based companies such as TekSavvy.

TekSavvy is not asking for Scott’s removal merely because we do not like his decisions. We are doing so because his conduct shows apparent bias toward Big Telecom and he has shredded the government’s promises to lower internet and mobile bills.

There is no doubt that Cabinet must terminate Scott’s appointment and undo this anti-consumer reversal. Otherwise, prices will keep rising. If he goes, and the 2019 decision is fully reinstated, we can promise that internet prices will go down.

Have your say now. Add your photos, videos and tweets at PaylessToConnect.ca, and easily send a message to your Member of Parliament. Tell them you demand better, more affordable services, and that the CRTC is no place for Big Telecom bias.