Netiquette for the 21st Century:  Is it an Enigma?

At the risk of sparking controversy, I would like to briefly address the so called “social code” that governs how we communicate in the digital world.  Broadly referred to as “Netiquette”, or the “Golden Rules for the Internet”, I recently discovered an article in The New York Times that addresses the extreme complexity of trying to define proper behavior on the Internet. 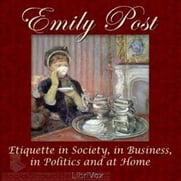 The article attributes our confusion over Internet etiquette, in part, to a lack of information from past generations from which we can collectively draw from.  In earlier times, long before the dawn of the World Wide Web, people turned to social etiquette experts like Emily Post for guidance about how to live a well-mannered life in areas such as politics, social society, and business.  Ms. Post’s guidelines about how to participate in polite society and avoid awkward social blunders, were readily accepted by the masses and incorporated into daily life.

Since the dawn of the new millennium and rise of the digital age however, it seems as though there is great disagreement about what constitutes appropriate online behavior. All too often many of us find ourselves floating around in cyberspace trying to decipher a common code of conduct that is as elusive as existentialism.  For some, the act of trying to determine how to act online, has been a painful and often times embarrassing venture (i.e. selfies and sexting).

In an attempt to fill this void, self-appointed “netiquette experts” are churning out books, blogs, and videos that all claim to be the latest and greatest code of Internet conduct for the masses.

Dubbed by some as the “Ms. and Mr. Manners of the digital generation”, I find myself questioning the validity and practically of their seemingly scholarly advice.  While one has to applaud their ingenuity and even, at times creativity, I have to wonder if their rules will ever become a collective body of knowledge that we all share and adhere to in our modern digital world.  With the great diversity that exists among Internet users, will we ever reach a consensus about how to behave in polite digital society?  Further, where exactly does one study in order to become a “Netiquette” expert?

I suppose that only time will tell whether or not digital social etiquette is a fallacy or a reality.  Until then, we want to hear your thoughts!

Find the article, The Emily Posts of the Digital Age, originally published in the New York Times on March 31, 2013, at http://www.nytimes.com/2013/03/31/fashion/etiquette-returns-for-the-digital-generation.html?pagewanted=all&_r=0

The opinions expressed by this blogger are theirs alone, and do not reflect the opinions or views of TekSavvy Solutions Inc.